First, good news!  I’ve had a few Etsy sales (goodness it’s hard to start out in a crowded market), and the first three sales were people we didn’t know, yay, and also, they all left reviews, yay, and ALL THOSE REVIEWS ARE FIVE STARS, YAY!!!  Plus I have a couple more in the works, from both friends and acquaintances.  I’ve been running a tumblr coupon sale for 10% off, but so far I’ve only had one bite on that, and none of my promotion posts have gotten many notes.  I’ve got about 125 followers, but it really takes a few reblogs before a post takes off, and that hasn’t happened.  Probably I’d have better luck trying to circulate a layout post with my shop info on it, but I’ve not yet tried that.  (Also, for any blog readers who want the coupon, it’s “TUMBLWEEN”, and it’s good through November 5th.

Second, less-good news: we have not been accepted into the Gryphon’s Grove classes we applied to.  However, that was one path of many, and we are not discouraged.  Caroline Kenner did divination to select her students, and this class is not meant to have us in it.  Perhaps that’s for the better, though, as I still have a mental block about the term “shamanism” and I may not have been ready for the work (under that heading, I mean – I’m more than ready to meet and work with new guides).  There are other methods of working with spirits for healing, however, and Gwdihŵ will continue to learn from his guides as we do reiki, and will perhaps discover more guides in the process.

Third, I’ve used some of my proceeds from the Etsy shop to purchase an Oracle Deck, which will eventually end up in the shop as well.  It’s “The Wild Wisdom of the Fairy Oracle Deck”, by Lucy Cavendish (art by Selina Fenech).  I’m going to do daily pulls for a while until I get to know it better – probably 30 days or so – before I list it, though.  So far it seems to be pretty straightforward, talkative, and encouraging!  Here are some pictures: 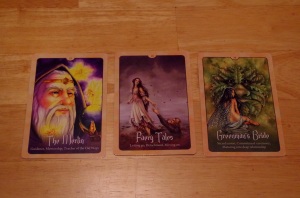 Fourth, I’ve been looking at threads and cord for the beads I posted about ages ago, and I’ve finally found one I like.  I ordered it and it arrived a week or so ago.  I’ve been playing with single strand or double strand, and different kinds of knotting between the beads, and I think I’ve found a knotting style I like… which means now all I need are some findings, and I can start putting beaded devotional jewelry in my shop!  I’ve been working a little bit on design, too, and as I finish items I will likely be posting them here.  But here’s a picture with all the different kind of knots, made with some loose beads (the knots I like best are the ones on that bottom strand, double overhand):

Fifth, I’m leading my first group ritual on October 25th!  It’s a Kemetic execration rite, honoring Bast and Sekhmet as the Eyes of Ra.  I’ve written up most of the prayers and outline, and I’ll post it here when finished.  I’m a little nervous, but I’ve got some good people as part of the ritual team, and I think the work we’re doing is really necessary for this time of year. Hopefully everything will go as planned, or as close to that as possible!

And that’s it for your pile of updates!

View all posts by 7serendipities

This site uses Akismet to reduce spam. Learn how your comment data is processed.